WhatsOn
Home News Review: GOT Season 8 Episode 2: ‘A Knight of the Seven Kingdoms’ 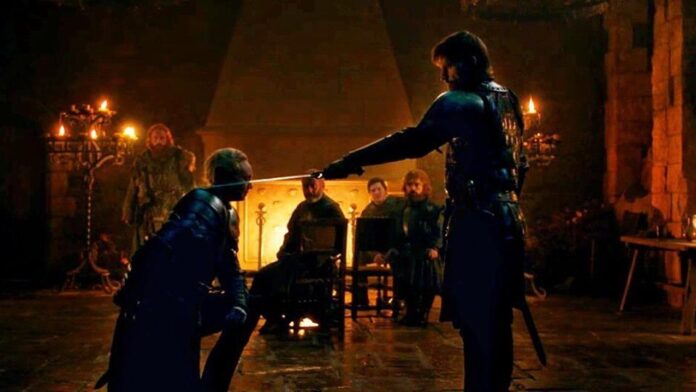 Another episode of Game of Thrones final season in down. Season 8, episode 2, titled “A Knight of the Seven Kingdoms”, aired on Sunday with lots of emotional moments, reunions, dramas and the planning of the biggest war of Westeros.
“A Knight of the Seven Kingdoms” was written by series mainstay Bryan Cogman to set on the eve before battle, it saw almost all the show’s friendly characters gather at Winterfell to hash out old grievances, pursue long-simmering romances, and generally cast a wistful glance back at all the crazy circumstances that brought them together.
This week focused entirely on the Winterfell story line. And much like last week, the entire hour was devoted to character development and interaction rather than action. The only action was Gendry and Arya finally getting it on which makes Arya has grown up into a young lady, but it’s still weird to see her strip naked and hop into bed with her old friend.
Apart from this the audience witnesses a Sansa-Dany détente they’re all dealing with a lot of power dynamics, braids, and breastplates which was interrupted by Theon Greyjoy. “I want to fight for Winterfell, Lady Sansa, if you’ll have me,” he tells her.
This episode also revealed something of the Night King’s motivation, which has been a question since the very first scene of the show’s first episode. According to Bran, the White Walkers are heading south so the Night King can kill him. “He wants to erase this world, and I am its memory,” the weirdo formerly known as Brandon Stark claims. That still doesn’t tell us why, but it’s something.
Brienne of Tarth, who claims that she never actually wanted to be a knight, admits the truth that the only thing she’s ever wanted is to be Ser Brienne of Tarth. Jaime Lannister, dutifully, knights the most noble person he’s ever walked beside, and pledges himself to her service, after making peace with Bran and Sansa.
Finally Jon disclose the truth of his birth and real name to Danny which kept her shocked and surprise because now Jon will be the true heir of Iron Throne.
Brienne accepted her knighthood from Jaime with perhaps her first moment of unbridled joy. Sam handed his family sword to Jorah, restoring a piece of the disgraced nobleman’s soul in the process. Grey Worm and Missandei, the sweetest romance in this story, made hopeful postwar plans to ditch the racist villagers of the North.
> Shatabdi Sarker Poushi