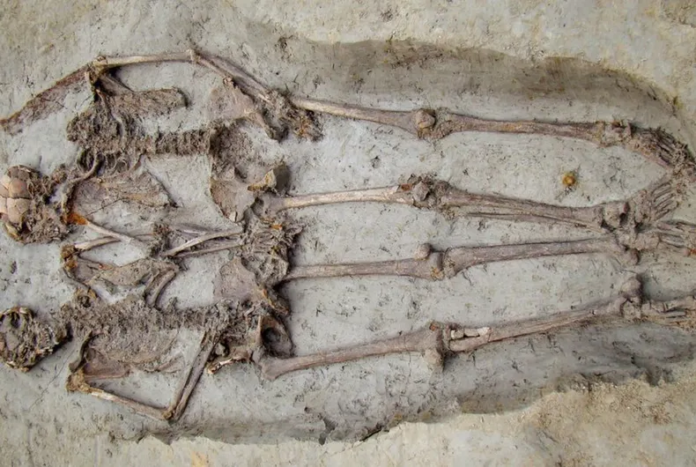 Archeologists have discovered that the famous ‘Lovers of Modena’ were both male.

The 1,600 year old skeletal remains were discovered in an ancient burial ground in 2009. Their endearing name was inspired by the way they appear to embrace – they lie close together, their hands interlocking.

The damage on the bones in the surrounding graves suggest the location was some kind of war cemetery. However, it did not occur to researchers initially that the ‘Lovers’ would both be male, considering how rare joint burials are and how discovered ones are almost always male-female.

The revelation comes after archeologists used innovative techniques to analyse the tooth enamel of each skeleton, discovering that they contained a protein only found in males.

Federico Lugli, the study author, theorised “the two ‘Lovers’ could have been war comrades or friends, who died together during a skirmish and, thus, were buried within the same grave”.

The story of the ‘Lovers’ attracted public interest and many noted how the skeletons being male does not mean they were not lovers. Members and allies of LGBTQ+ community noted an apparent double-standard among the academics who researched the ‘Lovers’: when the couple was assumed to be male-female, it was assumed they were lovers; but now that it is confirmed they were male-male, some academics emphasize how it is impossible to tell for certain what the reality of their relationship was.

While it is true that many sources around this time expressed intolerance towards same-sex relationships, such texts were written by a tiny echelon of society – the pious, learned and rich – who were often far removed from the historical realities of the masses. It is important to remember that homosexual relationships have a historical precedent in earlier Roman history.

The truth is those academics are right to concede that the relationship of the ‘Lovers’ will be uncertain. However, they must also overcome their heteronormative biases and consider the possibility that the ‘Lovers’ were, indeed, lovers.

A teacher claims she is on strike to save the ‘future...