“While I and my parents were eating dinner sitting in our house, we heard people shouting saying fire. Hearing the word ‘fire’ we came out of the house barefooted and saw 7 houses were burning close to our house. In five minutes, fire reached to our house and we could not take anything with us without risking our lives. All was burned,” Shahida, a 12-year-old girl described this sorrowful situation with tearful eyes.
The Jhilpar slum fire last Friday burned over 1,500 shanties in one hour. Though the fire did not claim any lives, the loss of property of the slum dwellers is still uncountable and the fire kept nothing for them except ashes. 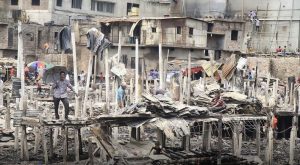 One third of the affected slum dwellers managed to take shelter in a nearby school, which they are using as a temporary shelter given by the government, but the majority are still living in the open sky. Though their homes are all burnt, they do not want to leave their own land as the slum dwellers have nobody living in the capital. 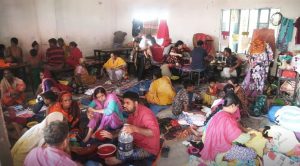 Farida Parvin, who was a servant by profession, said: “30 years ago I came to this place from Bhola selling my father’s property, and after buying 2 shanties I started living here with my family. The fire took everything from me. All my earnings in those years are all gone.
“This was my bedroom and that was the kitchen. Now the fire leaves only ashes. For 4 days I have been wearing only one piece of clothing and I also could not get a seat in the shelter. Nobody can feel our miseries,” said Ayesha, a garments worker. 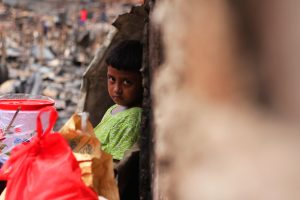 Siddique, who is a rickshaw puller, said: “Though the government has provided us with the shelter it is very tiny to live in with all the family members. My wife and children live there and I am passing the night under the open sky. There are many like me in the same situation. The fire left nothing for us.”
The government is providing 3 meals a day for the affected people. In addition, some NGOs have started giving out clothes, but it is very little compared to the demand. The slum dwellers are also concerned about the health risk and problems accessing clean water. 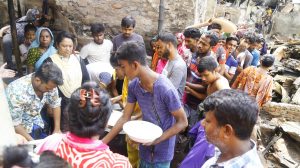 Harun, a day worker, highlighted how dengue is spreading relentlessly throughout Dhaka, and as they are now living in the open air, it will pose an even greater risk. “We are in serious danger. Is there anybody who can help us?” he asked.
Another slum dweller, Halima, added: “We were born in this place, we grew up in this place. We are not leaving our land. The government has to take the necessary steps immediately to save our lives and our remaining property.” 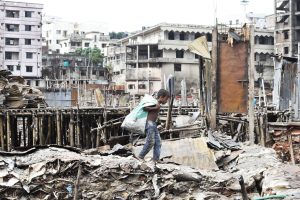 The slum dwellers are happy that the government is providing food but are also appealing to the authorities and NGOs for necessary steps to be taken immediately so that they can rebuild their houses as early as possible. They are also in fear that their land may be grabbed by powerful people as they are poor.
> Dipto Paul