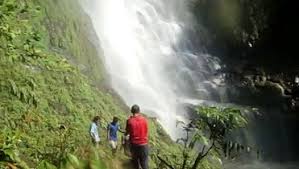 Baklai waterfall is so amazing and it is the top highest waterfall in Bangladesh. The waterfall is accessible both from Thanchi and Ruma.
Baklai Waterfall is situated at Baklai para in Thanchi upazilla in Bandarban. Baklai Waterfall is 370 feet high from the motherland. Baklai Waterfall is located at Thanchi so the traveler should go to Bandarban first. There are many bus services among the districts of Bangladesh to reach Bandarban. It may cost around 550/- Taka (BDT) to the travelers if they travel by any non-ac bus service. The travel buses usually start at night. The bus service providers may offer new schedule as well. It can be around 6-7 hours journey to go Dhaka to Bandarban. From Thanchi by bus or Chander Gari from Bandarban to reach the destination tour spot. It may take around 4.5 hours for the traveler to reach Thanchi. The distance between Bandarban to Thanchi is about 79 km.
To visit this waterfall, visitors need to plan to have at list five to seven days on hand. It will be best on their performance on the trek. This natural wonder of the world has become increasingly popular with the adventurists due to its challenging entries as well as its distinct beauty once it is finally reached.
> Puza Sarker Snigdha