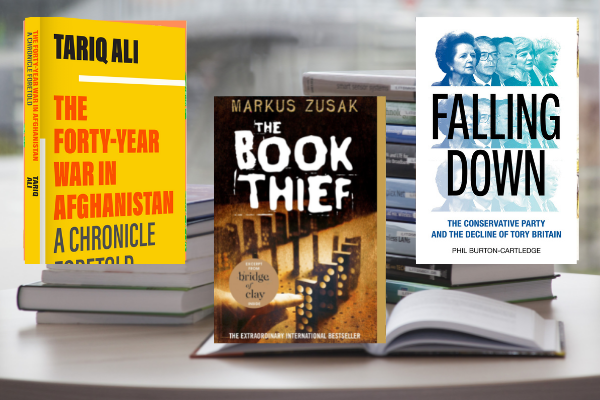 This week our Book Editor, Taposhi brings some political books to read to get to know more about politics that you shouldn’t miss out on. Don’t forget to read them out.

The Book Thief by Markus Zusak ****

This book was one of the few books that were given as a gift on my special occasion. I picked up this book carelessly thinking about what to read on that holiday afternoon. Although the beginning of reading this book was neglected, after some time I drowned in the story. Maybe that’s what happened to another reader too. But what was in the story? Here is a summary for the reader- First thing is when death tells a story, pay attention to it. Death introduces himself as the narrator of the novel. The first time he saw the book thief, he says, she was on a train. The next time he saw her was when he came for a pilot who had crashed his plane. And the third time was after a bombing. Death then begins the story. Liesel Meminger is a young girl growing up outside of Munich in Nazi Germany, and Death tells her story as “an attempt—a flying jump of an attempt—to prove to me that you, and your human existence, are worth it.” When her foster father helps her learn to read and she discovers the power of words, Liesel begins stealing books from Nazi book burnings and the mayor’s wife’s library. As she becomes a better reader, she becomes a writer, writing a book about her life in such a miserable time. Liesel eventually grows up and moves to Australia, where she has a family and lives to old age. When Death finally comes to take her soul, he shows her the book she wrote so many years before.

The Forty-Year War in Afghanistan: A Chronicle Foretold by Tariq Ali ****

In this book, Tariq Ali explains and condemns foreign interference in the Middle East, from the Russian occupation of Afghanistan in the 1980s to its American occupation, which began in 2001. There, Ali reveals that Afghanistan has often been subjected to aggression from foreign powers. This has led to serious hardships and the loss of life in its land, as well as to political backlash there and abroad. Ali traces US interests in Afghanistan to the Soviet intervention in the late 1970s and says that Russian, American, and NATO meddling combined to lead to the empowerment of the Taliban, the destabilization of Afghanistan and Pakistan, and decades of suffering for innocent civilians throughout the region.

Falling Down: The Conservative Party and the Decline of Tory Britain by Phil Burton-Cartledge ****

Phil Burton-Cartledge is the author of this book. She is a lecturer in Sociology at the University of Derby. In this book, she has explained despite winning the December 2019 General Election, the Conservative parliamentary party is a moribund organization. It no longer speaks for, or to, the British people. Its leadership has sacrificed the long-standing commitment to the Union to ‘Get Brexit Done’.