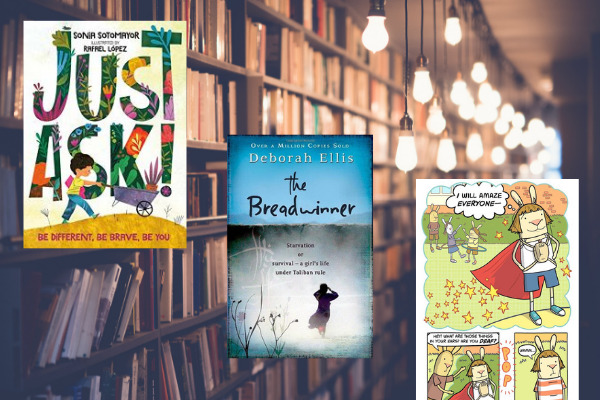 We’re living in a golden age of young-adult literature. Books are written for teens are equally adored by readers of every generation. For this week our Book Editor, Taposhi brings you three children’s literature books to read.

The bread winner by Deborah Ellis ****

At that time Afghanistan was under Taliban rule. The writer Deborah Ellis came to the Afghan refugee camp in Pakistan. Even she found a teenager like Parvana in the camp. So it can be said that the story is a bit close to life. A story about a young Afghan girl named Parvana who is growing up in Taliban-occupied Afghanistan. Her family is very well educated and thus are considered to be a threat to the Taliban. Parvana’s father can read and has a little place in the marketplace where he reads and writes for different people in Kabul. Parvana is young enough that she is allowed to go with him into the marketplace. Women, as we know, are not allowed to leave the house without both a burka and a male escort. Parvanas father is arrested by the Taliban, and the family starts to suffer from his absence. Parvana’s family decides that the only way they are going to survive without the father is if Parvana disguises herself as a boy and goes out and works in the marketplace. This story is so full of hope and heart. In this story, Parvana is a great heroine! She is scared at first that she will be found out, but after some time she learns to be brave, and she feels like she can do anything to save her Afghanistan. This book is a living document of the tragic history and reality of a war-torn nation.

Just Ask! Be Different, Be Brave, Be You by Sonia Sotomayor ****

This is a beautiful picture book about the courage children show in coping with and then outshining their differing abilities. The children in this book, with their differences – everything from nut allergies to ADHD to dyslexia to asthma, and many others – perfectly illustrate this concept. They show the reader how they are differently-abled, demonstrate their frustrations and anxieties. Those challenges bring to their lives, but then follow up with actions, strengths, positive results, and learning opportunities. Sotomayor wrote this book in part because of her struggles with juvenile diabetes. She does a beautiful job of teaching us how “all the ways we are different make our neighborhood – our whole world really – more interesting and fun.”

El Deafo is a graphic novel written and illustrated by Cece Bell. The book is a loosely autobiographical account of Bell’s childhood and life with her deafness. The characters in the book are all anthropomorphic bunnies. This is a great book for youngsters. Aside from pointing out the obvious fact that people are people and shouldn’t be treated differently just because they aren’t an exact copy of everyone else. It also did a great job of explaining exactly how it might make the person who is being treated differently feel. It also takes you through all the other trials and tribulations a young’ in might experience while navigating their way through elementary school.