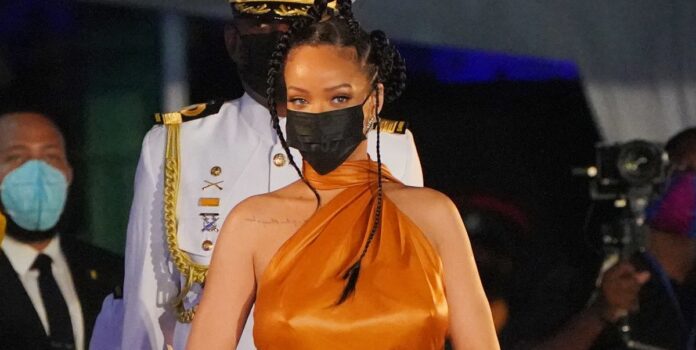 Barbados has overthrown Queen Elizabeth II as the nation’s head of state and declared itself a republic. Out with colonialism and bloody history of imperial legacies, and in with Rihanna and Dame Sandra Mason. On this historic day for Barbados, Rihanna accepted the title of “national hero.”

The celebration on Monday was a joyous occasion attended by scores of officials. In place of his mother, Prince Charles paid a visit to Barbados to congratulate the country on becoming a republic. Mason, 72, was formerly governor-general, and Prime Minister Mia Mottley swore him in as the country’s new president. Mottley remarked in a speech honoring Mason’s official launch “It is a woman of this soil to whom this honor is being given.”

Robyn Rihanna Fenty: Another Barbadian woman to receive recognition? Rihanna, our favorite pop star has been named a “national hero for Barbados” by the Barbados prime minister. Based on her famous song Diamond the prime minister addressed her

“Ambassador Robyn Rihanna Fenty: may you continue to shine like a diamond” “and bring honor to your nation, by your words, by your actions, and to do credit wherever you shall go. God bless you, my dear.”

Not only the country’s official ambassador for culture and youth since 2018, but she is also its most famous citizen and advocate. Her Bajan accent has never been softened, and her music, while influenced by pop, R&B, and dance, has remained true to her Caribbean roots. As a breeze blew in, Rihanna told the crowd:

“This is a day that I’ll never, ever forget.”

Rihanna expressed gratitude for the award and hoped for the youths of Barbados. And continue pushing the island forward in her final remarks: “I have traveled the world and received several awards and recognitions, but nothing, nothing, compares to being recognized in the soil that you grew in.”

Rihanna, masked due to the epidemic and dressed in a form-fitting gown with the grace of a now-veteran star, made no remarks after accepting her country’s highest honor.