WhatsOn
Home News Kanye West Met the President of Uganda and Presented him a Pair... 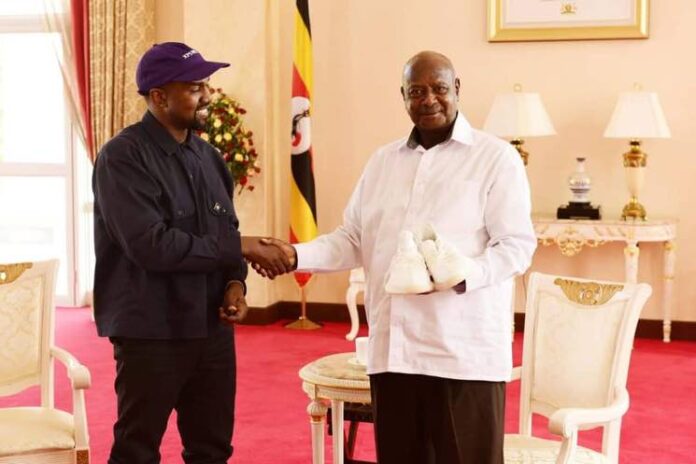 Just days after his highly publicized meeting with President Donald Trump, Kanye West has met with the President of Uganda.
Kanye, with his wife Kim visited the statehouse in Kampala, Uganda, as President Museveni handed the reality star a copy of his autobiography, Sowing the Mustard Seeds.
They discussed tourism and promoting Uganda’s arts, the president revealed on Twitter as he shared photographs of their get together and thanked Kanye for his ‘white sneakers’.
Posting on Twitter today, Ugandan President Yoweri K Museveni‏ shared a series of photos that show him meeting with both West and wife Kim Kardashian.
“I welcome American entertainment stars Kanye West and @KimKardashian to Uganda”, Musveni wrote.
“I held fruitful discussions with the duo on how to promote Uganda’s tourism and the arts. I thank Kanye for the gift of white sneakers. Enjoy your time in Uganda. It is the true Pearl of Africa.”
However, the rapper’s fans and followers were a little perplexed by the move as they took to social media with their raised eyebrows.
Another reason of this rapper to stay there is to record his ninth studio album Yandhi which has been pushed back from its original 28 September release date – it’s now set for release on 23 November.
> Shiuly Rina