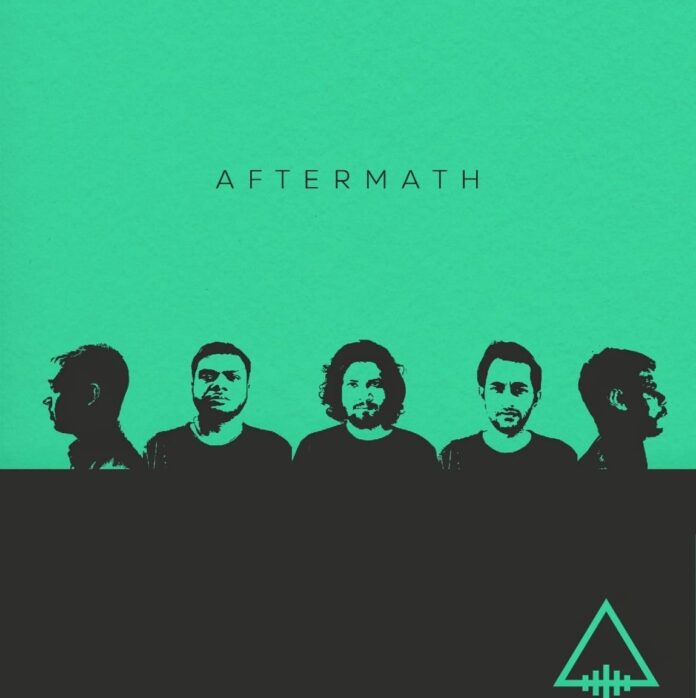 “Aftermath” is a Dhaka-based five-member Alternative Grunge band. Munia Iffat catches up with the whole band members, talks about their journey, first album, and so on.

‘Aftermath’ word is defined as the consequences or after-effects of a significant event. Aftermath Bangladesh chose the name for their band thinking something like that. The founding member of the band, Faheem said, “We chose the name for our band, as to think how the audience will react after listening to our song, it can evoke any mood. The after-effects of hearing Aftermath!

Aftermath started their journey in 2007. When we ask the band about their starting struggle, their vocal Navid shared, “To be honest if we describe ourselves, we are very lazy. It took us 13 years for us to release an album. Meantime, we released songs, performed, and our jamming session also continued… Some of our members left the band for personal issues, new member joined, but the Aftermath remained!”

“it would be a lie to say that we didn’t get publicity, anyone and everyone who liked our music helped us spread it. but yes, initially tough to build an audience, i guess in order to get recognition there is no alternative to releasing a song”

When we ask Aftermath about their pandemic journey…

“Staying home during the pandemic lockdown actually helped us to release our first album Jed. Since we all have daytime jobs, we could hardly make any time for music which delayed the process of recording our album. So, we finally worked on the songs and managed to release at the end of 2020. The time of releasing Jed was quite eventful for us. Sakib became a father, everyone suffered from Covid except me, Asif who played with us on Jed, lost his mother. Among a sea of loss, being able to complete Jed was a little spark of hope that luminate our lives” Navid replied.

“As Navid mentioned earlier we are lazy when it comes to music, I would say we can give music very little time and that is because we all have full day time jobs. It was hard to make quality time for music. So, in pandemic we got the breathing space to finally complete our album” Faheem added.

Currently, one thing bugging us is that some people are saying ‘the song is underrated, let it be. It’s not for all. We don’t give much importance to ratings.’ Please don’t be like that, for us every song matters. Don’t belittle other bands or their songs while praising us.

If Aftermath ever gets a chance to collaborate with any band, which one they will prefer?

If ever get the chance we would like to collaborate with ‘Owned’, and ‘Karnival’.

When Jed album was first released and the response from the audience we get was beyond expectation. We were overwhelmed, and grateful to the audience. It was huge!  Don’t know how many people have listened to our songs but we feel still a long way to go! It’s just started but the response we got from not only the audience also musicians, it felt spectacular.

After the Jed album now we are working on our next song “Biplobir”. The recording process is ongoing. Meanwhile, we are also preparing to release some singles. Not thinking about any album to release yet.