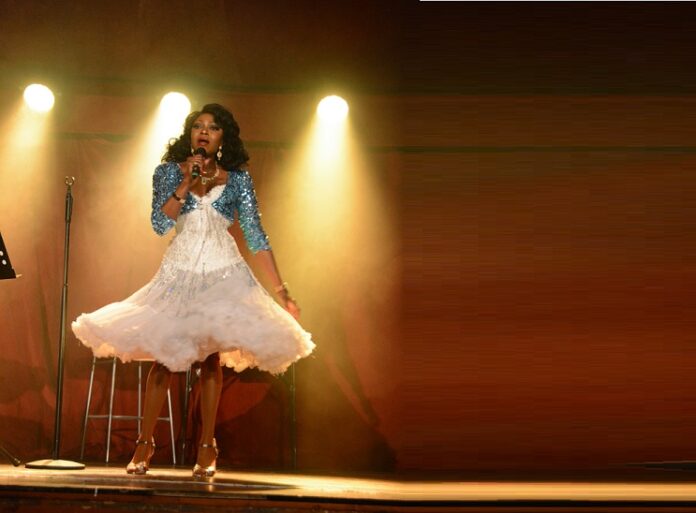 Pizza Express Live is a new venue in Birmingham, which seeks to combine
good food with quality entertainment and it certainly succeeded with the
performance of “Aretha and Me” by Patti Boulaye.

The upstairs venue has the ambiance and atmosphere of a small and
intimate nightclub and before the performance, we were served some very
pleasant food and drink by attentive and courteous staff. The evening’s
entertainment began to bang on time at 8.00 p.m.(always a plus with this
writer).

In this show, Patti compares and contrasts her own life with that of
Aretha Franklin and we were treated to a splendid evening of songs and
stories relating to both their lives and careers. We heard of Aretha’s
upbringing and the many difficulties that she faced on her way to
emerging as the global superstar which she became. It was also
fascinating to hear Patti’s own story of her early life in Nigeria amid
the tragedy of the Biafran war (which I will admit to being old enough
to remember from my own childhood). The stories from both lives led into
songs which were delivered beautifully and enhanced by Patti’s great
stage presence and ability to communicate with her audience, as she took
us through the progressive stages of the two careers. One thing which
was particularly striking was the variety of the material, ranging from
that great hymn “Amazing Grace” to uptempo numbers which had us on our
feet and dancing (with encouragement from the stage), soul classics and
even, one of Patti’s own compositions from her musical “Sun Dance.”
For my wife and myself, starved as we had been of live entertainment
since February of 2020, it was a great return and a thoroughly enjoyable
evening. We ended the night by having a friendly chat with this very
approachable artist and her husband, Stephen, with whom she recently
celebrated forty-five years of marriage. If anyone has the opportunity
to catch Patti on the “Aretha and Me” tour, it is certainly a show worth
watching.

Music To Enjoy This Week!