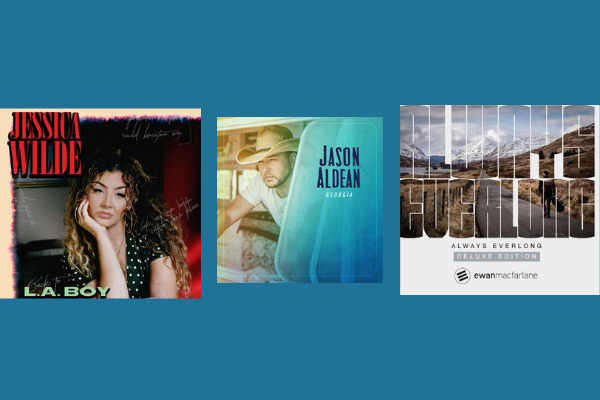 Our music editor Adam Humphries brings you the top music releases of this week! Make sure to add them to your playlist!

Scottish singer, and former Apollo 440 and Northern Grime Social front-man, Ewan MacFarlane has released his Christmas single for this year, This Year, and comes after releasing a deluxe version of his current record, Always Everlong, which is out early next year and scheduled for 18th February 2022.
Always Everlong is about paying tribute to people that we knew, both family, friends, and acquaintances whilst also looking forward to the future.
As you would expect, Ewan’s singing voice is filled with emotion and is both captivating, melodic, and soothing all at the same time. Everlong is in the same musical vein as Adele and Sinead O’Conner where it is filled with a heartfelt emotion yet somehow manages to be uplifting at the same time. The lyrics are just as heartfelt as it is about everyone coming together and getting out of their houses to embrace each other. “Sisters, fathers, mothers, and brothers, have we had enough of the fighting/Get out of your houses and see one another.”

If you like heartfelt music with a voice that is strong and carries an emotional feel, this is one for you, even the video has that intimate feel and has that Nothing Compares 2 U look about it in which it’s all shot outside and focuses solely on Ewan himself.

London girl, Jessica Wilde, has released the music video for her song, LA Boy. For those who have not yet heard her song, here’s a quick recap. Her song is about the romance that she has with a boy from LA, it is about her reminiscing about the relationship, what they did and how things were before he left. Jessica is left and thinking about their romance.
The video has that intimate feel as it is shot through a video recorder giving it that intimate feel, it is inter-cut with scenes of Jessica herself recording and producing the track. Use the link below to view the song.

Everyone is surprised as Shawn Mendes and Camila Cabello, the duo released a joint statement announcing their breakup recently. Almost two weeks after their split, Mendes has now dropped a new song titled It’ll Be Okay. The lyrics of the song seem to talk about parting ways from a lover as he sings, “Are we gonna make it?/ Is this gonna hurt?” and “I start to imagine a world where we don’t collide/ It’s making me sick but we’ll heal and the sun will rise.” In another verse from the song, Mendes also sings the words, “I will love you either way” which seems to be a big hint about his relationship with Camila.

K-pop band Exo’s Kai has dropped his new album ‘Peaches’. And in good news for all, ‘Peaches’ also comes with a new MV.  The MV can see the K-pop idol lazing under a peach tree while dressed in a gauzy white outfit inspired by traditional Korean clothing. ‘Peaches’ is the title track of Kai’s sophomore mini-album of the same name.

Jason Alden unveils ‘Whiskey Me Away’

Just three weeks after the release of Macon, Jason Aldean has dropped “Whiskey Me Away,” the first track off Georgia, the second half of his Macon, Georgia double album. Written by country top-seller Morgan Wallen alongside Rodney Clawson, Jeff Hyde and Drive Williams, Aldean’s new song recounts an unexpected budding romance after the protagonist makes a happenstance turn into a “long-lost highway town.” He and his new love interest end up getting boozed up, but enjoying every fleeting moment they have together.