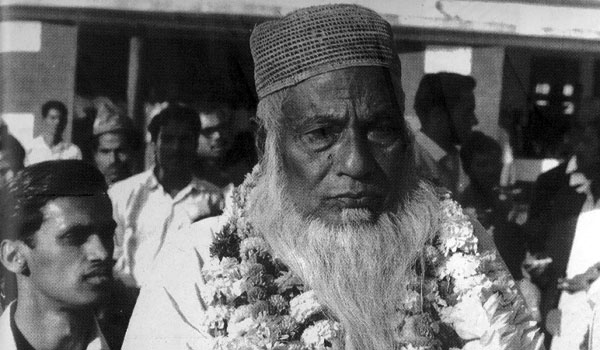 A life full of protest

Abdul Hamid Khan Bhashani was born in 1880 in the village of Dhangara. After completing his religious schooling at Tangail and becoming a Muslim religious mentor, or Maulana, Bhashani enrolled in the Islamic Center in the United Provinces, known as the intellectual seat of militant Islam in British India. Before he could complete the course he joined a politico-religious movement advocating militancy for Islam. A decade and a half later Bhashani became one of the most ardent followers of another politico-religious movement of the Islamic World the Khalifate movement in 1919. Protesting the dissolution in Turkey of the Khalifate (Caliphate) by Kemal Ataturk landed Bhashani in jail for ten months.

Long before he joined the Khalifate movement Bhashani had been a crusader for peasant rights in Tangail against the oppressive landlords. Following a peasant uprising against the King of Santosh in which Bhashani played the leading role, he was expelled by the British from the Mymensing district which included Tangail. Uprooted but undiscouraged, Bhashani continued to organize peasant movements in northern Bengal.

Movement for the Bengali language

After his return to East Bengal in 1948, the Maulana became one of the forefronts of the students’ language movement. They were demanding that Bengali be accorded equal recognition with Urdu, the language of West Pakistan, as one of the two official languages of the new Muslim nation of Pakistan. The same year, Bhashani dissociated himself from the Muslim League Party and formed a counterparty, the Awami (nationalist) Muslim League Party. Bhashani has also founded the first organized opposition party in Pakistan.

Like Gandhi, Bhashani succeeded in institutionalizing political dissent and making opposition politics viable and respected. Also like Gandhi, he never accepted any position in government. Although he was elected to Assam, Bengal, and East Bengal assemblies and was himself the founder of the most effective political parties in Pakistan and Bangladesh. Ideologically, Bhashani was a Marxist and Islamist, at the same time both admiring the People’s Republic of China. Enigmatic, uncompromising Bhashani was a charismatic leader who could motivate ordinary people to join his movement for social and economic justice.

Maulana Bhashani had written personal letters to Chairman Mao and the Premier of the People’s Republic of China, Chou en-Lai, expressing surprise at Peking’s support to the Pakistani military junta.

It was also learned that Bhashani, had been given a heroic reception during his visit to Peking and knew the Chinese leaders personally. He described the things in his recent letters in vivid detail the ruthless atrocities of the Pakistan army on the innocent unarmed people in Bangladesh.

Additional information on Bhashani and his activities can be found in