By Amara Iqbal
Greta Thunberg, the 16-year-old activist who has become one of the leading voices in the climate debate, has further called out the crisis in The 1975’s opening track in their new album, ‘Notes on a Conditional Form’.
Rather than a song, Greta passionately recites an essay over instrumental music from the British band.
Greta Thunberg first became famous when she started to protest outside the Swedish parliament every day for three weeks during her school hours, as she called out for action to be taken on climate change. She has progressively built an online following, with more students like her from around the world, such as in Germany, Japan, the UK and Australia, joining in to take part in the protest.
Thunberg is an advocate who has inspired many people, especially Matty, the 1975’s lead singer. In a tweet revealing the collaboration he also said that income from the track is pledged to Extinction Rebellion, the environmental campaign group. 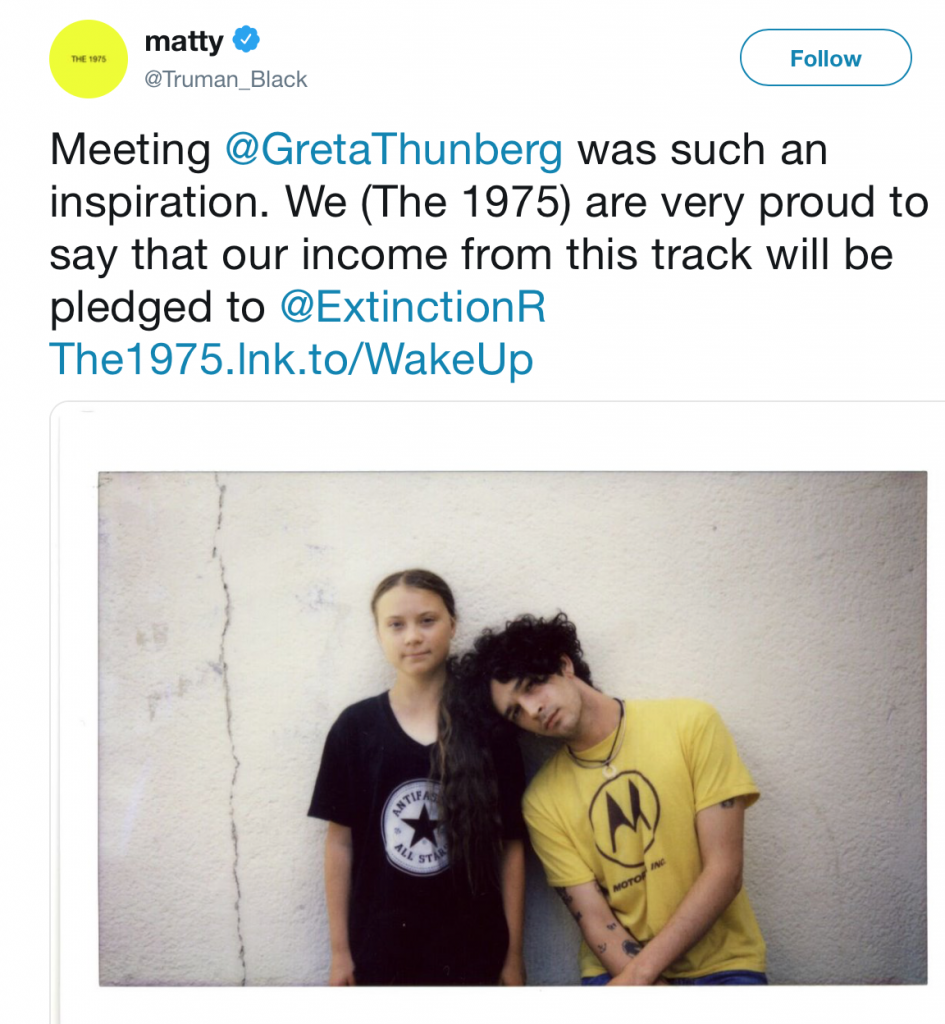 Thunberg’s essay is a direct message about climate change, and how we need to be aware of what is happening.
She asks people to “please wake up and make the change required possible, there is still time to turn everything around. We can still fix this.” She continues: “We are facing a disaster of unspoken suffering for enormous amounts of people, and now is not the time for speaking politely or focusing on what we can or cannot say. Now is the time to speak clearly.”
Thunberg tells listeners how politics would not step up for the change, as there are no rules. “Today we use about 100 million barrels of oil every single day,” she continues. “There are no politics to change that. There are no rules to keep that oil in the ground, so we can no longer save the world by playing by the rules because the rules have to be changed, everything needs to change, and it has to start today.”
Thunberg became a prominent political figure after speaking at the European Parliament in Strasbourg and the UN’s Katowice Climate Change Conference.
Four years ago, she was diagnosed with Asperger’s, a form of autism. In an interview, she told the BBC: “Being different is a gift.” It makes her see things from outside the box, as she does not fall for lies. If she was not different and was like everyone else at school she would never have started the strike.
It is at Greta’s request that all the money from the track will be donated to the environmental campaign group Extinction Rebellion.
You can listen to the track on YouTube at: youtube.com/watch?v=zq4eCQCgQw8