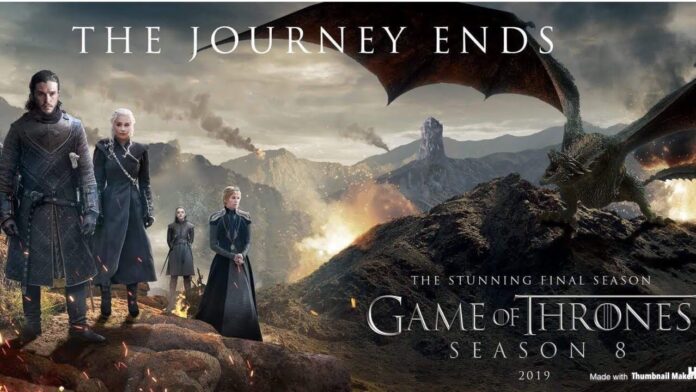 The long waiting is about to end. Game of Thrones is finally coming back for its final season on 14th April on HBO with the deserving “Promised King” of Iron Throne and all the highlights of the show.
The final six episodes of the epic fantasy saga will kick off on Sunday, April 14 at 9/8c on HBO in the US, with a simulcast on Sky Atlantic in the UK from 2am on Monday, April 15.
Last month, actors including Gwendoline Christie and Sophie Turner to Kit Harrington and Peter Dinklage gathered at New York’s Radio City Music Hall on GOT Red Carpet as they prepared to say farewell to the fantasy epic in style.
The season premier preparation is almost done with the arrangement of big screening of the show is all over the country. Apart from this, A huge Iron Throne is being displayed at Rockefeller Center in New York City.
The major source of excitement for fans will be seeing Jon and Arya reunited. The two haven’t seen each other since the second episode of season one, when Jon gifted Arya her precious sword, Needle.
In the teaser video, as the three Stark kids stand in front of their own crypt statues, a frost creeps down the hallway. The signal of the White Walkers causes Jon and Arya to draw their blades, anticipating the coming fight.
Well, fans are also eagerly waiting to see what happens to Cersie, The Kingsguard, Tririon along with all the fan favorite characters. Lets see to how extend the creators of the show surprises us.
> Shatabdi Sarker Poushi

Korean Money Heist is On Process