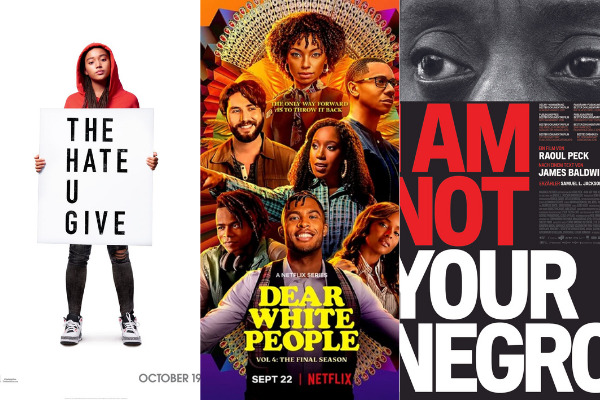 No matter what day it is, films have always been a go-to when you’re looking to pass some time.  In addition, social causes are at the forefront of our consciousness.  So here we are with 5 social awareness movies to watch this weekend.

If you read past the title, you’ll understand this is satire. Described early on as a dream about “being a black face in a white space,” Dear White People explored escalating racial tensions at a fictional Ivy League college from the perspective of several black students. It’s worth watching if only to understand the ways in which the college experience can be different for marginalized people. It might be even more surprising to see the internal and intracranial conflicts that arise, as every student chooses to navigate the setting differently.

I Am Not Your Negro

The Oscar-nominated I Am Not Your Negro is an impactful documentary. It is from Raoul Peck that ties in Baldwin’s ruminations on the lives and murders of Medgar Evers, Malcolm X and Martin Luther King, Jr. While Jackson isn’t seen in the film, and is technically listed as a narrator. His readings of Baldwin’s words were just as important as the visuals surrounding them. With Jackson’s some amazing voice work, nailing Baldwin’s inflections while reading Baldwin’s words. For those of you looking to see how the systemic racism embedded in America’s soil has been passed down, a documentary like I Am Not Your Negro hold all of the keys.

This movie is bound to make you double think about your next meal especially if it’s got pork in it. “Okja” is a 2017 sci-fi movie about a society that raises super pigs to be butchered for food in a city led by an authoritarian figure. A young girl who has raised one sets out on a rescue mission when her pig, Okja, is taken by the government. The film not only implies an environmental awareness for animals. It is also a message for societies that are led solely by consumerist qualities.

A workplace comedy is about women employed by a Hooters-Esque restaurant may not sound like a social justice film, but it is. Lisa is an optimistic general manager at a sports bar. She has her optimism challenged by an increasingly long and hard day at work. While Support The Girls is often funny, it’s also a bracing look at what it’s like to live paycheck to paycheck. Besides there exist in a racist and misogynistic society. The workers are constantly sexually harassed. The company that owns the bar does the bare minimum with regards to diversity and racial sensitivity. The movie is impressively subtle in its social commentary, and ultimately concludes that, while these women may go through all of this trouble, they’re alright as long as they support each other.

The Hate U Give

The movie is based on the bestselling novel by Angie Thomas. The Hate U Give follows Starr, a black teenager stuck between two worlds: the poor, mostly black neighborhood she lives in and the rich, mostly white prep school she attends. When she witnesses the fatal shooting of her childhood best friend by a police officer, she finds these worlds clashing as she tries to stand up for what’s right.