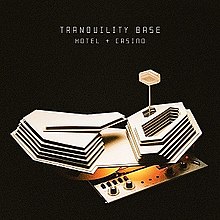 There is just something truly magnetic about the Arctic Monkey’s sound. Their latest album, Tranquility Base Hotel & Casino, delivers track after track of great music.
The songs are unique and yet, running through the whole album, the band manages to insert an underlying current of sounds reminiscent of their previous albums. Tranquility Base Hotel & Casino can only be described as a laid-back beauty of an album, with songs that could be included in the soundtrack of your summer.
Despite sounding new and unique the sound is still distinctly very Arctic Monkeys. The band fronted by Alex Turner have managed it once again – they have delivered an album that fans are sure to enjoy and that is bound to keep them excited about what they will produce next!
> Naomi Round