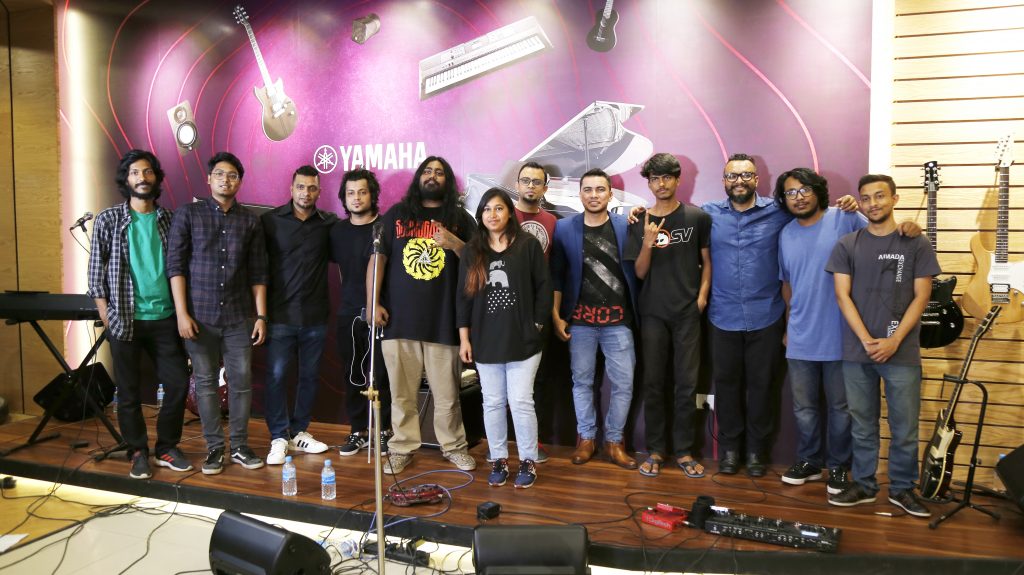 “This is the most fantastic show I have ever attended in my life. I never thought that I could see a ‘Black’ performance up close. This is one of the most memorable experiences of my life”, says Sabbir, a university student sharing his thoughts with WhatsOn after attending the BLACK LIVE IN YMB show organized by Yamaha Music Bangladesh, a concern of ACI Motors Limited, at Jamuna Future Park, Dhaka.

Along with ‘Black’ three other bands, ‘Encore’, ‘Level Five’ and ‘Olik’, also performed at the musical session.

Starting as the opening act, ‘Olik’ rocked the arena with their high voltage performance. Their high energy got the crowd going and prepared fans for ‘Black’s’ set.

Thanking Yamaha Music Bangladesh, ‘Olik’s’ vocalist Lincon said, “As a new band it’s a huge opportunity to have this platform to perform. Events like these are helping a new generation of musicians reach their audiences and showcase their talents.”

After Olik, Level Five and Encore successively added some flavor to the session, keeping the crowd’s anticipation going. The bands performed songs from their upcoming albums, another benefit of the session which provided this space for promoting new music.

“We are releasing new albums this year and this session is a huge opportunity for bands like us to create interest and promote our music,” said Yamin, guitarist for the band ‘Encore’.

Asif, who plays drums for ‘Level Five’, said, “It’s great to be performing here, but, like everyone else, we are excited to see Black perform.”

Finally, with humble cheers from the audience, ‘Black’ stepped on stage with their current lineup: Rubayet Chowdhury on vocals, Charlz Amit Francis on bass, Farhan Tanveer on drums and longtime and only remaining founding member Khademul Jahan on lead guitar.

They performed their hits including Amar Prithibi, Mittha, Manush Pakhir Gaan, Roder Bhetor Rod and many more to great enthusiasm from the audience, who sang along with the legendary band.

Thanking the audience and Yamaha Music, Black vocalist Rubayet said, “This is a great initiative by Yamaha Music. As the new vocalist of ‘Black’ I want to make a place for myself in the hearts of this band’s amazing fans. These kinds of indoor events are best for performing right up close with the audience and have them feel and enjoy our music closely.”

Founding member and lead guitarist Khademul Jahan said, “After being in the music industry for nearly two decades, we have had many experiences, both good and bad. Now we are in a position of responsibility to bring changes to our industry. We are performing in full swing now with some amazing new faces in our lineup. If a new generation of artists are inspired by what we do in these events, we are always ready for to perform for them.”

A.K. Rahul, the man in charge of Yamaha Music Bangladesh said, “Yamaha is organizing these musical sessions since last year to influence the music enthusiasts of Bangladesh. Our goal is to encourage and support a new generation of musicians all over the country.”