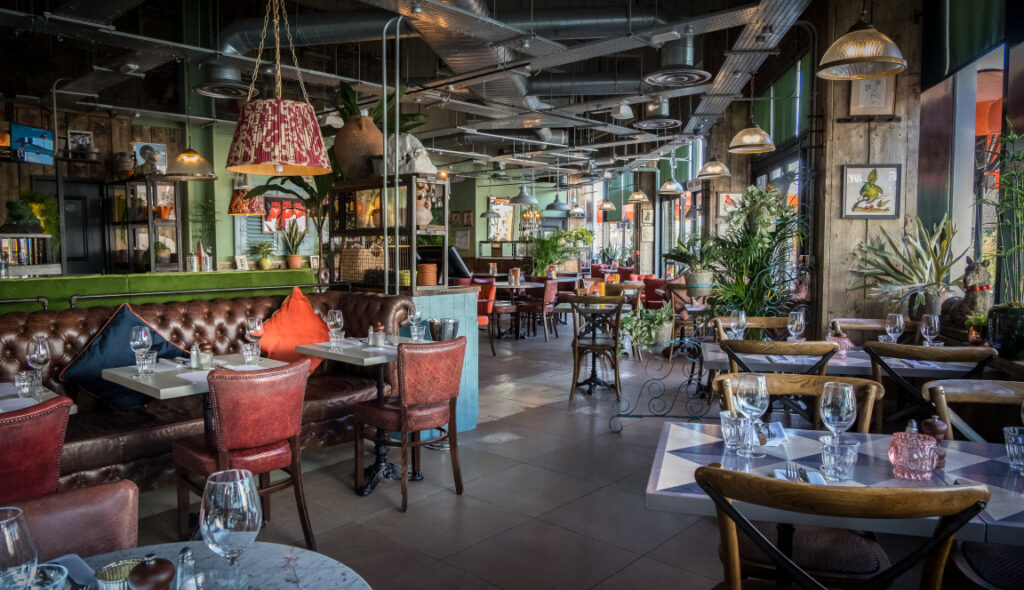 With the growing popularity of vegan diets we are all becoming more aware of the environmental and health benefits, but perhaps you don’t know that becoming a vegan doesn’t mean you can’t still go out and enjoy a steak?

Of course we don’t mean your typical steak, but this is where the inspired and inventive Veganuary menu at Bill’s Restaurant and Bar comes in, challenging any pre-conceived notions you might have about what’s available on a vegan diet.

While not a vegan myself, I’ve been trying vegan dishes more and more because I know they are better both for me and the planet. However, it wasn’t until I tried Bill’s Veganuary menu at their Bullring branch that my eyes were really opened to the variety of options out there.

Bill’s has the expertise behind it to really showcase plant-based meals, given that its founder Bill Collison started his career as a greengrocer. It already has popular vegan staples on its main menu, in the form of their Carrot, Cashew Nut and Mushroom Wellington and Jackfruit Salad Bowl, but with the now annual Veganuary drive in January this is the perfect opportunity to offer even more.

To accompany the dishes, and keeping in mind that for many it’s also Dry January, Bill’s has created a variety of Low and No Alcohol Cocktails, ranging from the familiar Virgin Mary but with the twist of Bill’s Hot and Fruity Sauce, to Shrub It Off, a blend of Somerset raspberry, blackberry and honey shrub with raspberry syrup and lemonade. While we were tempted by the latter, we opted for the Watermelon and Raspberry Cooler, which was as refreshing and revitalising as it sounds – a mix of watermelon and raspberry juice, orange and Bill’s pink lemonade, served with a satisfying chunk of watermelon. There is also a selection of low and non-alcoholic beers, pressed juices and soft drinks available. 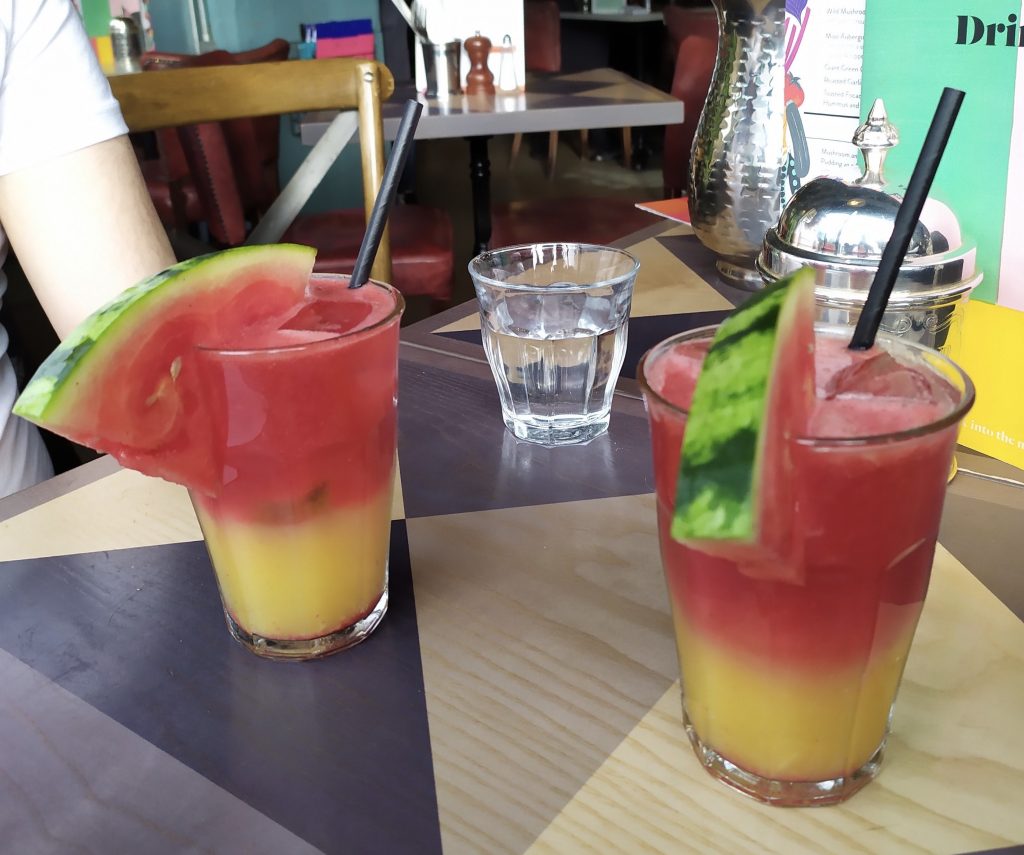 Turning to the food we went straight for the appealing list of mains, opting for Bill’s Beetroot Steak and the aforementioned Wellington. Presented with the steak I was amazed as if you didn’t already know, it could have been mistaken for meat, but this had the added satisfaction of a slight sweetness from the beetroot. It went perfectly with the accompanying béarnaise vegan mayo and a generous portion of fiery tiger fries that had just the right amount of chilli for me scattered on top of crunchy sweet potato fries, alongside a side salad of pea shoots and red peppers. I would happily switch from beef to beetroot steak after this! 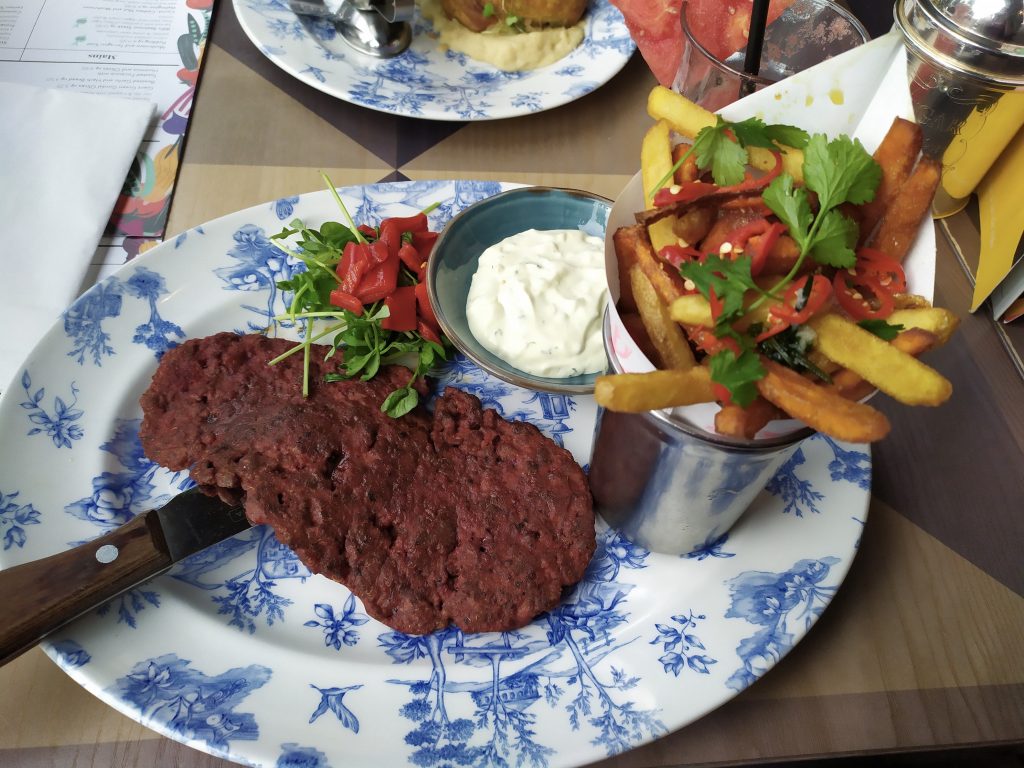 It was easy to see why the Carrot, Cashew Nut and Mushroom Wellington is a particular favourite – not only were its fresh ingredients beautifully presented, but these made a delicious, flavourful filling within the melt in the mouth pastry and butterbean mash, topped off with a rich vegetable gravy and long stem broccoli. 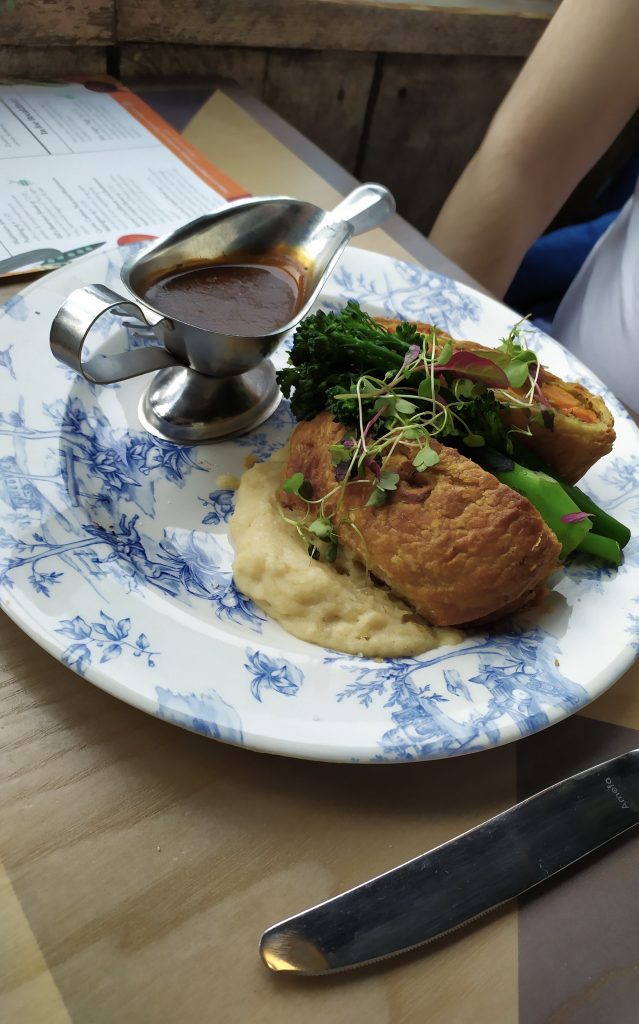 Other mains options include a Spiced Cauliflower and Butternut Squash Falafel Bowl, and a Mushroom and Tarragon Suet Pudding, and what’s more you can enjoy these with Bill’s exclusive Veganuary offer this month enabling customers to order any main from the Veganuary menu and enjoy a vegan dessert for just £5 (available after 5pm). See the full menu here.

As with the mains where we were impressed at how Bill’s had transformed traditionally meaty dishes, we were intrigued at how their seemingly dairy dependent dessert options would fare. We were not disappointed! The Frozen Amaretto Parfait tasted as good as it looked, with a tangy raspberry sauce and warming hint of amaretto, and a satisfying contrast of textures between the parfait, its coconut flake topping and bed of shortbread crumbs underneath. 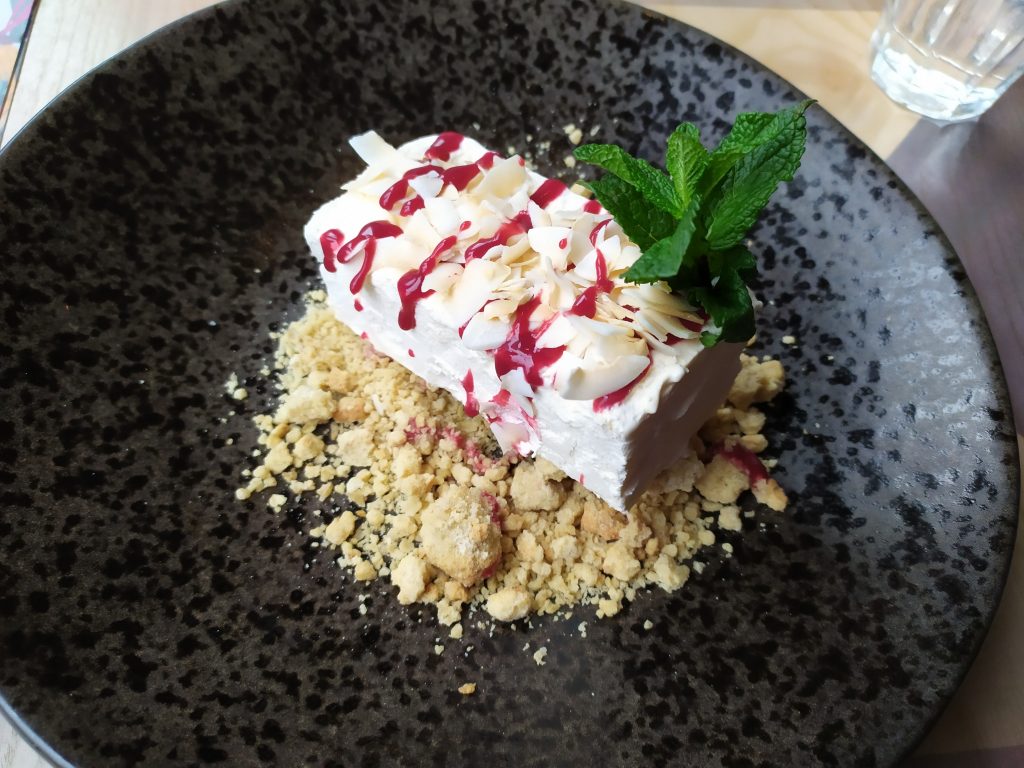 Meanwhile the Sticky Chocolate Pudding was another successful twist on a classic, deliciously dark and offset with a scoop of coconut ice cream, syrup drizzle and hazelnut. 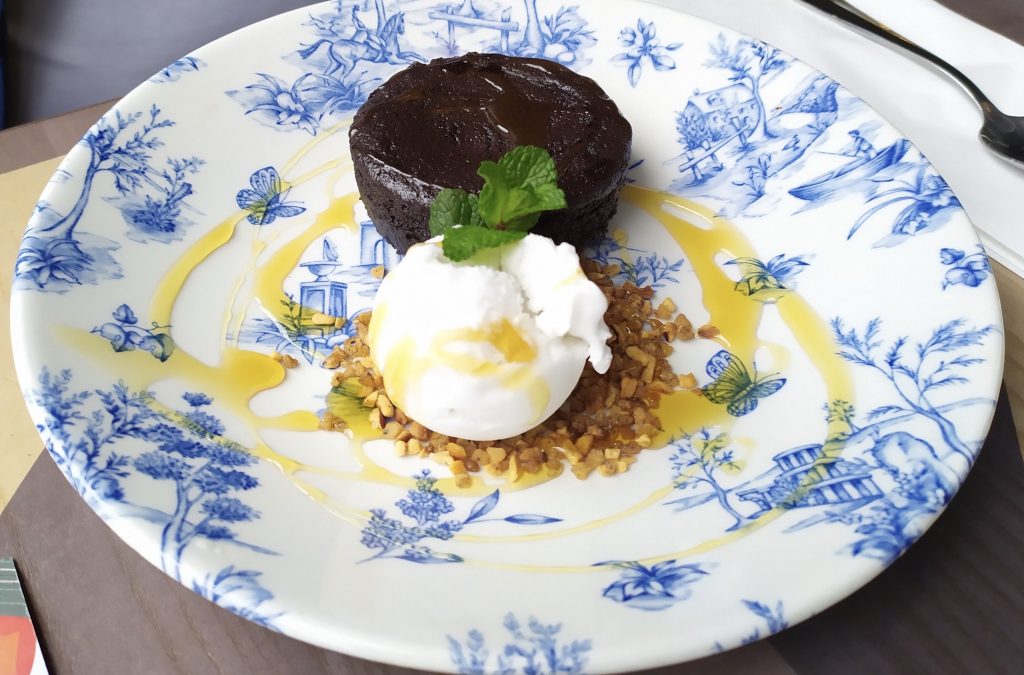 While we found these two courses satisfyingly filling enough for an early lunch, we were definitely tempted by their wide range of starters, including Wild Mushroom Soup, Miso Aubergine Fritters and Toasted Focaccia with Hummus and Olives. Anyone wanting the full three-course vegan experience should certainly try these too!

We left savouring new and pleasing flavours, and with the knowledge that we had been able to indulge but without the guilt!

Bill’s dedicated Veganuary menu is available throughout January, so don’t miss out! 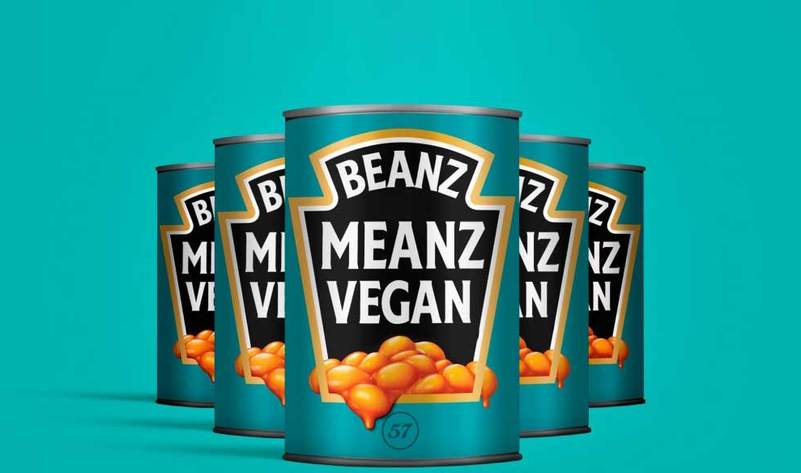 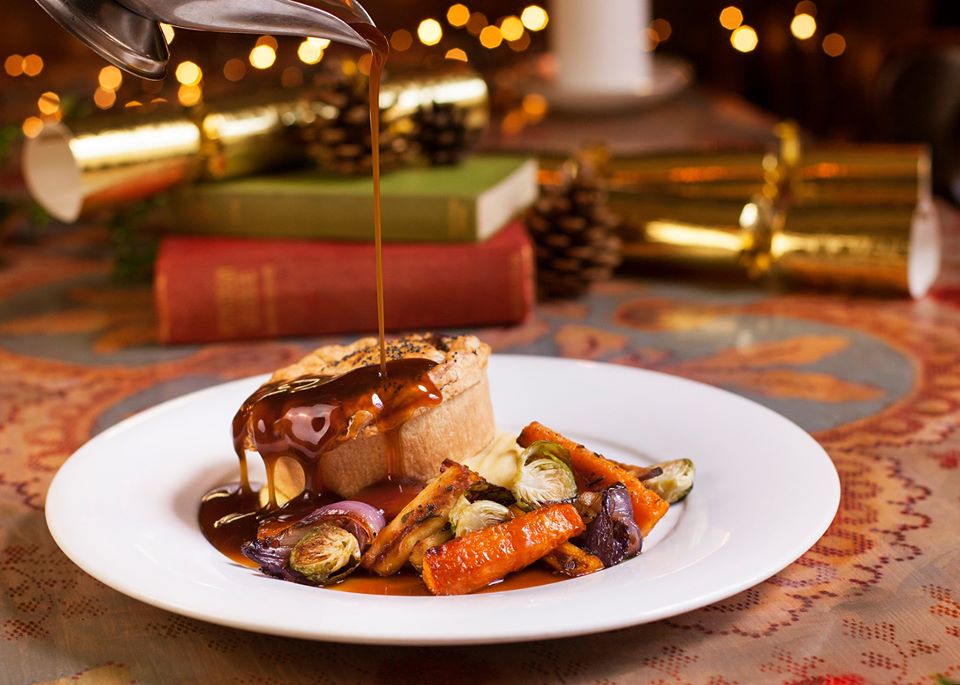 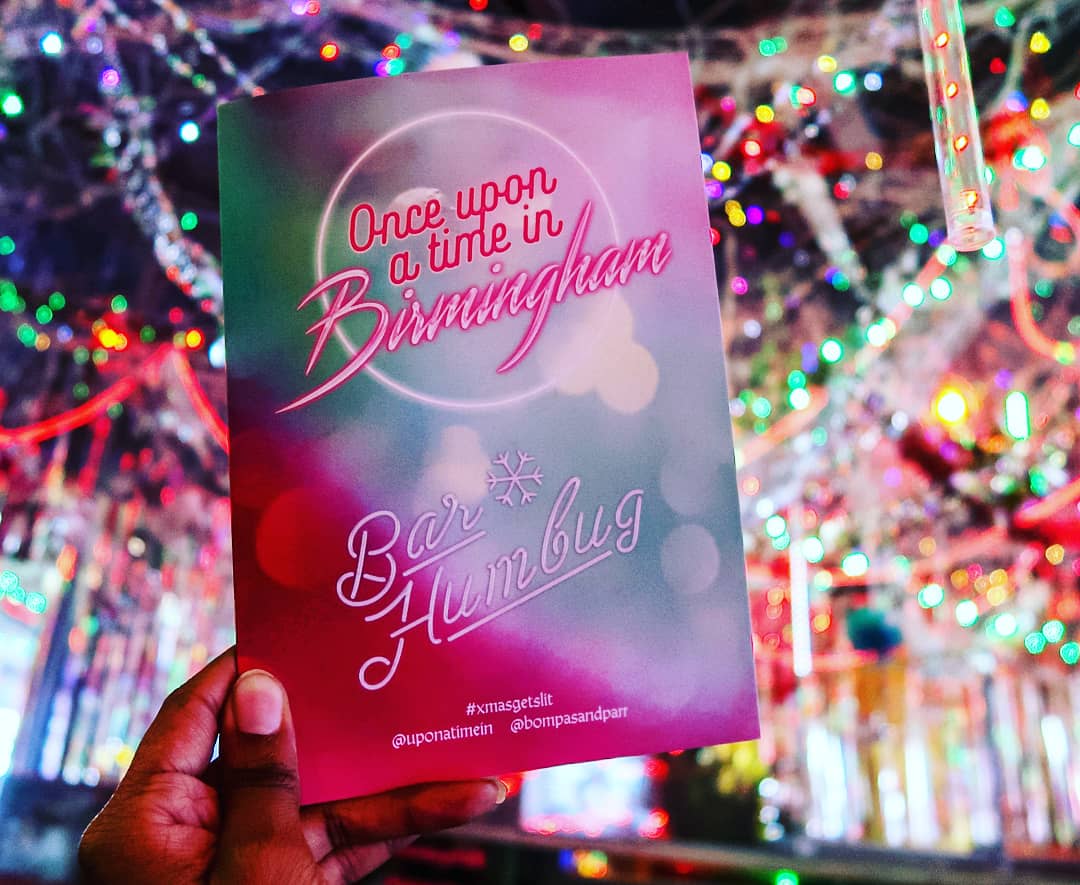 Review: ‘BAR HUMBUG!’ – Once Upon A Time in Birmingham