Dozens Hurt in Catalonia as Independence Protesters Clash with Police 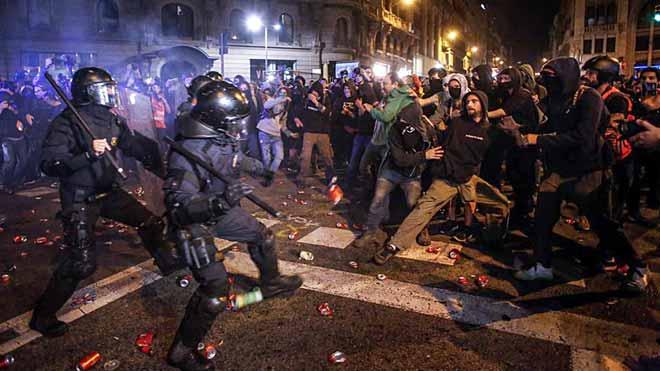 Riot police have clashed with protesters outside a football match between Barcelona and Real Madrid. Forty-six people were lightly injured, eight needed to be taken to hospital for extra care and people were arrested.

Police have shot foam bullets at protesters in Barcelona on Wednesday night as thousands of Catalan independence supporters staged a demonstration before the widely anticipated El Clasico football match between the country’s biggest sporting rivals.

The match in Barcelona’s Camp Nou stadium began without incident and was halted only briefly when some fans threw balls onto the field bearing a message for the Spanish government to open a dialogue with the separatists.

The protesters, many of them carrying Catalan separatist flags, posters which said “Spain, Sit and Talk” in English, began setting up barricades in the middle of the street, which they then set on fire after police arrived in dozens of vans, report says.

Inside the stadium thousands of fans held up blue banners with the words ‘Spain, sit and talk’ which were given to supporters outside the grounds and also carried the words, ‘Freedom, rights, self-determination’, as well as the slogan of Democratic Tsunami,

Police closed the south exits of the stadium leading to the street where the clashes took place and asked fans to leave the venue through the north exits for “security reasons”.