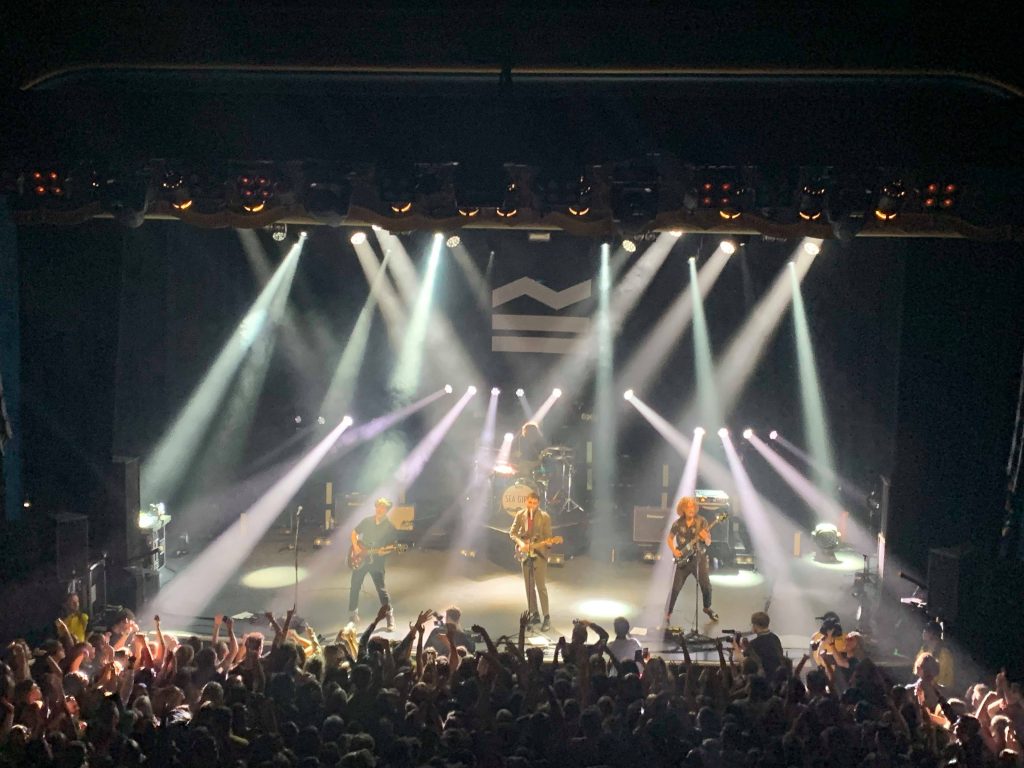 This month, my favourite musical find of the year, Sea Girls, have been travelling up and down the country performing to clusters of indie rock fans who’ve eagerly waited for their leg of the tour.

After discovering Sea Girls on a recommended Spotify playlist, I knew as soon as I’d heard ‘Call Me Out’ that I had to see them before the year was up. It’s not often that I find bands that I click with instantly, so I crossed my fingers and searched for upcoming gig dates. Festival season had just come to an end, so my hopes weren’t too high, but when I saw they were soon coming to my local stomping ground my eyes lit up brighter than my laptop screen.

Having scrolled through their social channels for a sneak peek of what I was in for and blasting their tracks on every commute for the past fortnight, I was more than ready to see them for their stint in the ole smoke at the O2 Forum Kentish Town on Thursday night.

To kick off the night, The Mysterines warmed up the crowd and after a shaky start with a few audio issues picked up momentum and propelled angsty rock to a willing crowd. The highlight of the set was ‘Gasoline’ which would suit a post-heart break scene in a 90s chick-flick, where the leading lady sets aside her Kleenex, cuts her hair and chucks out her ex’s belongings. After an unexpected sharp exit by the young rock band, the crowds were left a little confused but soon cut in by chanting ‘Sea Girls, Sea Girls!’.

Not long after, fans were put out of their misery as they graced the stage with new single ‘Violet’ as the opener. My first impression was that the tone of, lead vocalist, Henry Camamile’s voice sounded just as good as it did on the track that I’d been looping all week.

The next thing I noticed was how full of beans the other members were, especially lead guitar Rory Young who took to the left-hand side of the stage. I originally thought this would die down as the set went on but the boys showed no signs of tiring which was such a joy to see.

After the first couple of tracks, Camamile took the time to thoughtfully emphasise the importance of respect and that he would personally see to the removal of fans who exhorted any type of “dickhead behaviour.”

Back to it, they carried the energy through with tracks like ‘Too Much Fun’ and ‘Closer’, with traits reminiscent of fellow indie rock band One Night Only. 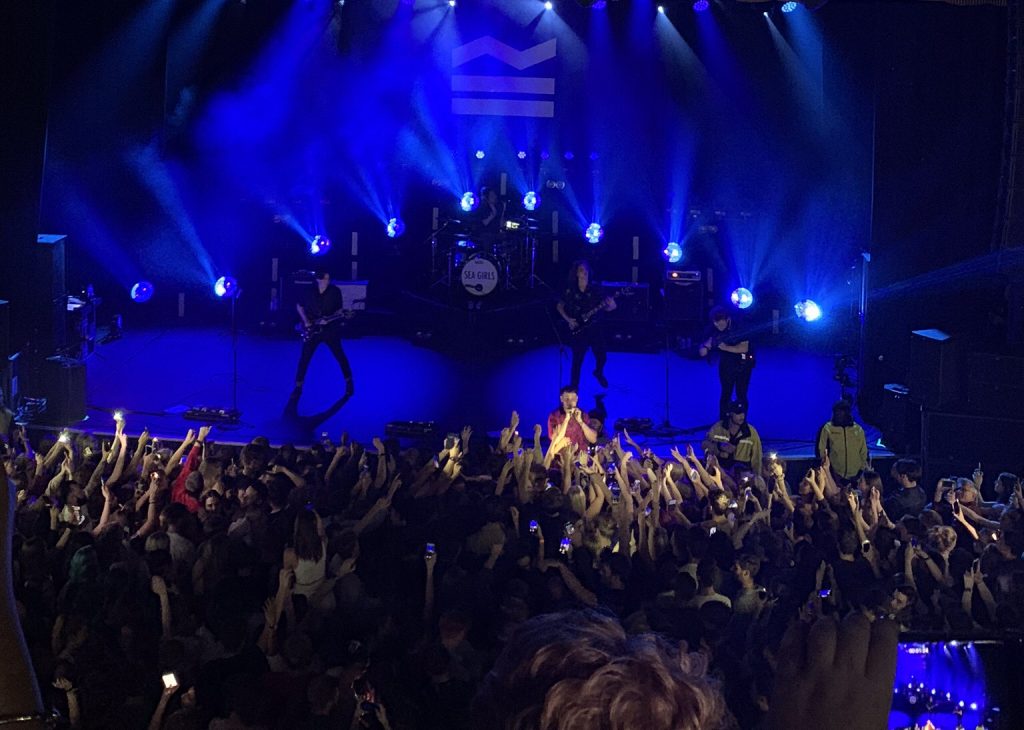 Evidently, Sea Girls are confident in their own style of performing and their ability to keep crowd morale high as there wasn’t a dull moment throughout the whole set. I was kept on my toes throughout partly due to Camamile’s lairy antics as he frequently stage dived and even climbed to the top tier of the balcony seating area during ‘Damage Done’. This was very entertaining but security must have hated this as they battled a swarm of teens trying to get the best Snapchat story. Through the sea of smiling faces and the surge in energy levels, Camamile’s rock’n’roll style antics ignited a spark as the audience bounced the vibe back to the band and powered them through to the end of the set.

Drawing to the end, ‘Call Me Out’ was announced as the last song, which saddened me because one, I didn’t want it to be over, and two, because they hadn’t played my personal fave, ‘Adored’. After cheekily disappearing and coming back for the second time, ‘Adored’ was finally played as the ending track, with confetti and character, it finished the set perfectly. My love for the song might have something to do with the lyrics “she’s only 23”, which is the magic number that I currently am, so as I chant back the heartfelt lyrics I enjoy pretending the song is about me.

Leaving the venue, I got that post-gig buzz and a nostalgic feeling of when I was 15 and first started going to music events. After this, I can confirm two things, that I will be listening to their addictive songs for the foreseeable future and that I will do my best to see them again in 2020. 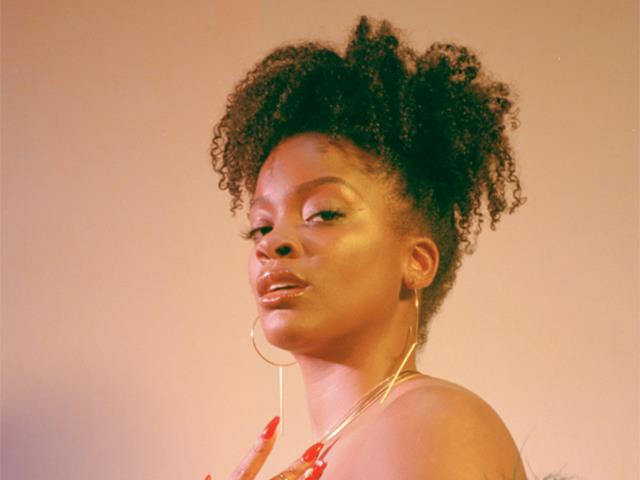 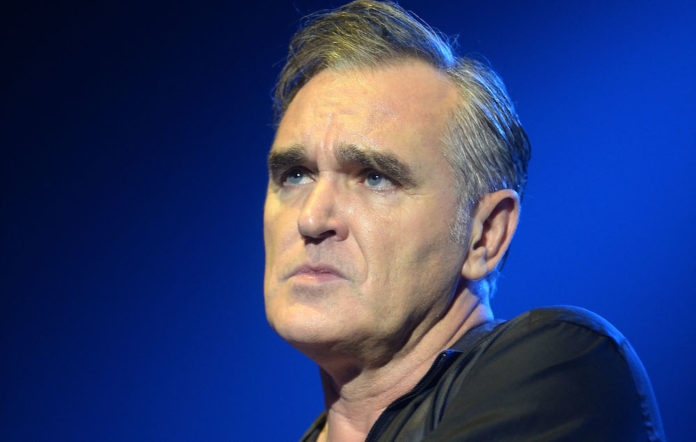 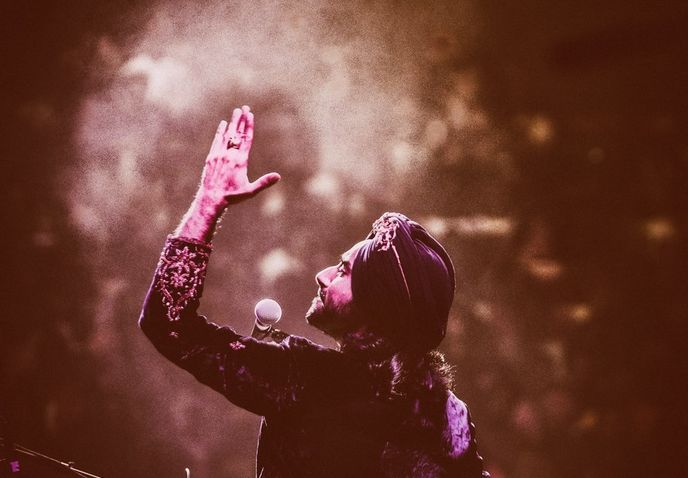