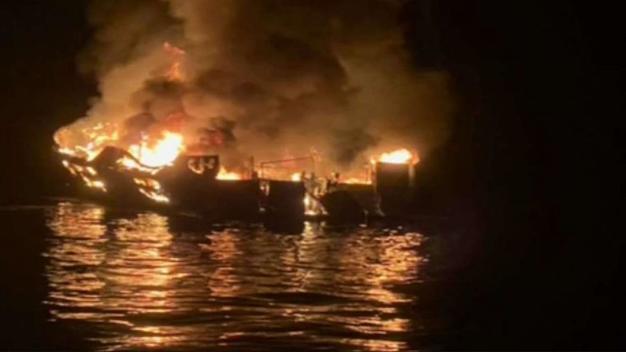 The fire started in the early hours of Monday, while the boat was about 90 miles (145km) west of Los Angeles. The boat engulfed in smoke and flames. While firefighters tamed the blaze, the vessel sank 20 yards off the shore in more than 50ft of water.

“This is probably the worst case scenario you could possibly have,” said Bill Brown, Santa Barbara county sheriff, noting that the passengers were likely all asleep at the time. “We understand the tremendous burden that [families] are under as they wait to determine exactly what happened and what condition … their loved ones are in.”

Monica Rochester, an official with the Coast Guard in Los Angeles, said: “We will search all the way through the night and into the morning … We all should be prepared to move into the worst outcome.” The five crew members were on the bridge of the vessel, awake at the time flames were spotted, and were able to jump off the boat in time, the coast guard said.

Audio of a frantic mayday call captured someone on board shouting, “I can’t breathe,” before the call was cut off.

Coast Guard Lieutenant Commander Matthew Kroll said: “authorities had recovered 20 bodies and discovered five more that cannot yet be recovered due to unsafe conditions under the boat”.

When four bodies recovered were identified as two adult males and two adult females, but authorities said they would need to do DNA tests to identify them. Officials had no other details to share about the missing people.